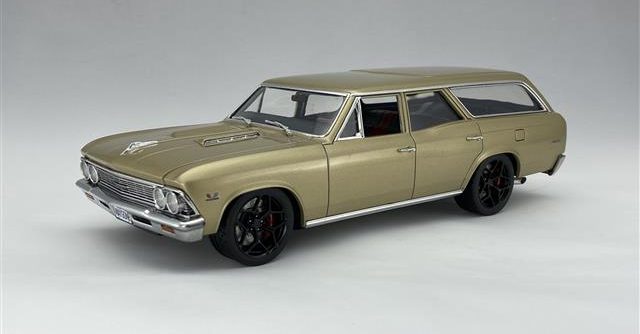 Here is a project I almost started more times than I can count. I can go through my project pictures and see where I pulled it out, and later put it away. Rinse and repeat. This time around, I finally dug into the build! For some reason, the ’66 Malibu/Chevelle is one of my favorite years for the name. For a model kit, building the wagon version is just plain fun! I think my earlier hesitations revolved around not knowing how I wanted to finish it. I did settle on a color a couple of years ago. That helps.

My original plans for the build:

Everything fell into place except for the LS engine. After waiting months for delivery, I tried to cancel the order through Paypal. Shortly after, the engine showed up. The casting was so poor that even after assembly and painting, I couldn’t bring myself to use it. I decided to stick with the kit’s big block.

The body work and prep was fairly simple I had to fix a couple of small sink marks and deepen the panel lines of which there are many! Once the body was prepped and cleaned, I sprayed it with Tamiya primer. I started airbrushing the decanted Tamiya Titanium Gold paint but found that it was very difficult to avoid tiger stripes in the paint with the brush. After the first wet coat, I switched to spraying directly from the can. The end result was a smooth even coat of paint. After applying a few decals on the body, I sprayed it with decanted Tamiya Clear.

Sanding and polishing was fairly straightforward and yielded a nearly flawless finish.

This wagon deserved a mean stance and a great set of wheels to nail the pro touring look. I had recently discovered Plamoz and fell in love with their Z28 wheel and brake kits.

I wanted to add as much detail to the interior as possible simply because there is so much of it! I chose a two tone grey and red combination. It seemed like a color combo that fit the pro-touring theme of the build. I wrapped up the detail with flocking for carpet and a combination of bare metal foil and Molotow chrome for trim details.

Up to this point, the build went smoothly. The bodywork and interior required minimal effort. The engine build came later because of the Clearly Scale debacle but it went together and detailed nicely. I detailed the suspension with yellow shocks and red swaybars and springs to mimic Koni and Eibach respectively. That’s when things started giving me trouble.

The suspension was the first real challenge. The ride height in the rear, compared to the front was entirely too high. Fortunately, cutting the springs took care of the problem. The problem in the front involved a front assembly that placed the wheels too far back in the wheel wells. I had to auger out the spring holes and cut all of the mounting tabs to position it properly. I used 5 minute epoxy to give me time to properly position the part. In the end, it still wasn’t quite right. I ovaled out the mounting hole in the wheel to give me the flexibility I needed to get it right. I then discovered that I had lost the chrome trim piece that attaches to the hood! I made one out of sheet styrene and wrapped it in Bare Metal foil.

Lastly, I had hoped to use the bumpers without stripping and applying Spazstix chrome but I found a flaw I couldn’t ignore. After botching the first attempt at chroming the front bumper and grill, my second attempt was a success. Oh, I can’t forget to mention the new exhaust tips made from aluminum tubing to give the exhaust a more menacing look!

The list of challenges goes on and on and I eventually finished this build. I had to polish and re-polish blemishes in the clear and touch ups here and there. I can spot my mistakes but they are relatively small. Overall, I love this build. I accomplished the pro-touring look with a couple of subtle changes while maintaining a mostly box stock build.

After years of false starts, I’m finally digging into this build! Having paint and parts on hand certainly helped.

Here it is in it’s untouched glory.

I ordered a set of Plamoz Z28 wheels and brake kit.

These wheels are going to make this build!

Getting things assembled and ready for paint.

I started with red for the interior accents.

Once the red paint dried, I masked it with tape or parafilm and sprayed grey paint.

Once the base colors of the interior was complete, I added flocking for carpet as well as chrome detail in the seats and door panels.

The door panels had a wealth of detail that was begging for attention. I used bare metal foil and Molotow chrome.

The kit came with nice decals for the instrument cluster and radio. I also used plenty of Moltow chrome to pick out the details.

Having completed the interior it was time to get moving on the body. I finished prepping the body and sprayed it with primer.

I decided to give the titanium gold a gloss aluminum base.

I started by spraying the body with decanted titanium gold and after a couple of coats, I followed up with paint straight from the can. This helped avoid the tiger stripes I was getting with the airbrush.

After adding a few decals to the body, I sprayed it with decanted Tamiya clear.

This is the clearly scale supercharged LS9. I

The Plamoz brake kit included brake pads and backing plates and anti chatter springs. Considerably more detail than necessary since they will be hiding once the kit is built. It was fun to build nonetheless.

The interior and wheels/brakes are ready for final assembly.

Once the glass was installed, I set the interior in place. All of the other components are nearing completion.

This was the ride height with no modifications. This wasn’t going to work for my pro-touring build. The problem was corrected by cutting the springs.

The engine detailing and wiring was completed.

I installed the engine and started working on the heater hoses.

I continued the pro-touring build in the front suspension with yellow shocks (Koni) and red sway bars and springs (Eibach). I order to get the piece to fit correctly, I had to auger out the spring buckets and cut all of the mounting pins.

Once the front suspension alignment was resolved, it was time to glue the wheels in place. I used 5 minute epoxy to give me time to ensure proper wheel alignment.

With the body, interior and chassis complete, it was time to finish the details.

I finished installing the bumpers, wipers and door handles.

The ride height and color combination turned out excellent!

Even though I really wanted a modern LS engine in this build, I’m beyond pleased with the big block and details.

The metal exhaust tips add to the restomod look.

Although the real thing would be rather heavy, the idea of stowing my autocross gear in the back to head to my local events, brings a smile to my face.

I wrapped up 2018 with this Chevelle. During this year, I managed to tackle two long term builds, knock out a rework and a restoration as well as a few fresh, quicker builds.

The only car missing from this line-up is the 69 Corvette that I built in less than 2 weeks and sold at a local hobby swap meet.