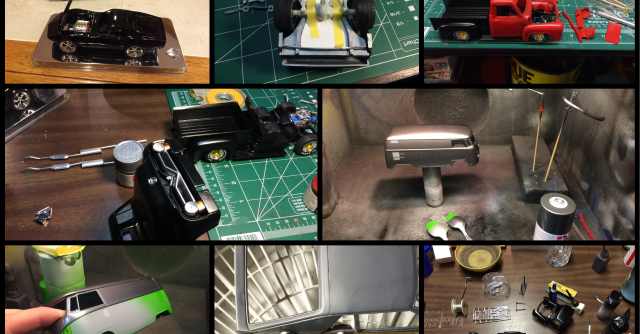 Having wrapped up a few projects, I started attacking the VW bus. I started that project in 2007 and having figured out how I wanted to paint it, I really wanted to hammer it out. For the most part, the paint work was going well until a mishap to the green paint when I pulled off the masking, it slipped out of my hand and landed on the still solidifying paint. The mistake led to a series of mistakes that resulted in the bus going in for a dip in the degreaser to strip the paint.

My yearly goal is to try and finish five kits a year and I was on task to finish the bus until I wrecked the paint. With that out of the running, and my motivation crushed due to the mistake, I turned a small project where I re-lit an old Christmas ornament with multi-color flashing LED’s. After picking my power source voltage and calculating the correct resisters, I went to work and wrapped it up quickly.

Once I finished the ornament, I started working on my hemi Charger project. I cut out the rest of the chassis pan and created patch panels. I also worked on straightening out a bit of bow in the body using brass strips and my dehydrator. It worked out relatively well.

I wrapped up the year by finishing an old ’55 Ford F100 truck that was built out of spare parts over a decade ago. I had thought to strip it and paint it pearl lime green, but after I realized that I couldn’t pull the bed apart without destroying it, I decided to do a quick rat build. I think I spent about three days on it and it was done. I’m really happy with the way it turned out even though it is a hodge podge of spare parts.

Test spoons are very handy. I quickly discovered which color combination I preferred.

The VW bus…prior to several attempts at fixing the blemish (on the other side).

After botching the bus, I started whittling away at the Charger.

I created new panels for the chassis pan and continued body work on the interior tub.

This is the first time I’ve ever tried to do something like this. It turned out well.

I used plenty of tape to locate the axle to check alignment and ride height.

While trying to fix the blemish on the bus, I re-cracked a repair on the other side.

This rig ended up working well to fix the warped body.

For my Christmas ornament. I reused the original light holder and made a mount for the cluster of LED’s.

It looks messy but after I filled the space with hot glue to prevent shorts, it worked out well.

The rat truck in progress. The cab and pieces were stripped to clean up some nasty old paint.

Pontiac twin turbo engine for the truck. Why not?

Wrapped up and finished in 3 days.